The Kahuzi-Biega National Park is a protected area near Bukavu town in eastern Democratic Republic of the Congo. It is situated near the western bank of Lake Kivu and the Rwandan border. Established in 1970 by the Belgian photographer and conservationist Adrien Deschryver, the park is named after two dormant volcanoes, Mount Kahuzi and Mount Biega (fr), which are within its limits. With an area of 6,000 square kilometres (2,300 sq mi), Kahuzi-Biega is one of the biggest national parks in the country. Set in both mountainous and lowland terrain, it is one of the last refuges of the rare species of Eastern lowland gorilla (Gorilla beringei graueri), an endangered category under the IUCN Red List. The park is a UNESCO World Heritage Site, inscribed in 1980 for its unique biodiversity of rainforest habitat and its eastern lowland gorillas.

The park lies west of the Bakavu town in South Kivu Province, covering an area of 6000 km2. A small part of the park is in Mitumba Mountain range of the Albertine Rift in the Great Rift Valley, and the larger part is in lowland terrain. A corridor of 7.4 kilometres (4.6 mi) width joins the mountainous and lowland terrain. The eastern part of the park is the smaller mountainous region measuring 600 square kilometres (230 sq mi); the larger part measures 5,400 square kilometres (2,100 sq mi) and consists mainly of lowland stretching from Bukavu to Kisangani, drained by the Luka and Lugulu rivers which flow into the Lualaba River. Two dormant volcanoes are set within the park’s limits and lend their names to it: Kahuzi (3,308 metres (10,853 ft)) and Biéga (2,790 metres (9,150 ft)).

The park has a rich diversity of flora and fauna and provides protection to 1,178 plant species in the mountainous region of the park, with some 136 species of mammals 349 species of birds, as of 2003.

The park’s swamps, bogs, marshland and riparian forests on hydromorphic ground at all altitudes are rare worldwide. The western lowland sector of the park is dominated by dense Guineo-Congolian wet equatorial rainforest, with an area of transition forest between 1,200 metres (3,900 ft) and 1,500 metres (4,900 ft). The eastern mountainous sector includes continuous forest vegetation from 600 metres (2,000 ft) to over 2,600 metres (8,500 ft), and is one of the rare sites in Sub-Saharan Africa which demonstrates all stages of the low to highland transition, including six distinguishable primary vegetation types: swamp and peat bog, swamp forest, high-altitude rainforest, mountain rainforest, bamboo forest and subalpine heather. Mountain and swamp forest grows between 2,000 metres (6,600 ft) and 2,400 metres (7,900 ft), bamboo forest grows between 2,350 metres (7,710 ft) and 2,600 metres (8,500 ft), and the summits of Mounts Kahuzi and Biéga above 2,600 metres (8,500 ft) have subalpine heather, dry savannah, and grasslands, as well as the endemic plant Senecio kahuzicus. 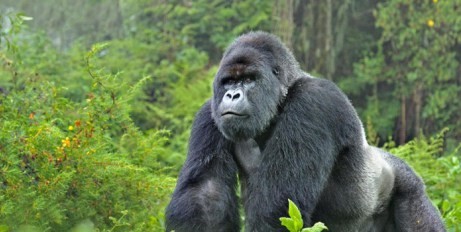 An Eastern lowland gorilla in the Kahuzi-Biega National Park

Among the 136 species of mammals identified in the park, the eastern lowland gorilla is the most prominent. According to a 2008 status report of the DR of Congo, the park had 125 lowland gorillas, a marked reduction from the figure of 600 gorillas of the pre-1990’s conflict period, and consequently the species has been listed in the endangered list. The park is the last refuge of this rare species. According to the census survey of eastern lowland gorillas reported by the Wildlife Conservation Society in April 2011, at least 181 gorillas were recorded in the park

The species of fauna listed under the IUCN Red List as threatened include:

Avifauna on the IUCN Red List are also mentioned:

The park, under the management of the Institut Congolais pour la Conservation de la Nature, has a basic management and surveillance structure. However, the park’s 1975 expansion, which included inhabited lowland areas, resulted in forced evacuations with about 13,000 people of the tribal community of Shi, Tembo and Rega affected and refusing to leave.  Cooperation by the communities living around the park and employment of the Twa people to enforce park protection was pursued by the park authorities. In 1999 a plan was developed to protect the people and the resources of the park.

Overview Important Info Established in 1970, and recognized as a UNESCO World Heritage Site in 1980, the Kahuzi Biega National Park is one of the only places to see eastern low-land gorillas. Also known as Grauer’s Gorillas, this is the largest of all gorillas as a male can grow to be over 600 pounds and over 6 feet tall. What You Can Expect Gorillas Tracking In Kahuzi-Biega National Park – 3 Day Tour Kahuzi-Biega There are great efforts that go into protecting this species as the numbers have drastically declined over the years. Seeing these amazing mammals in their natural habitat as they roam freely spending the majority of their days eating plants is a once in a lifetime experience to be cherished forever. Itinerary: