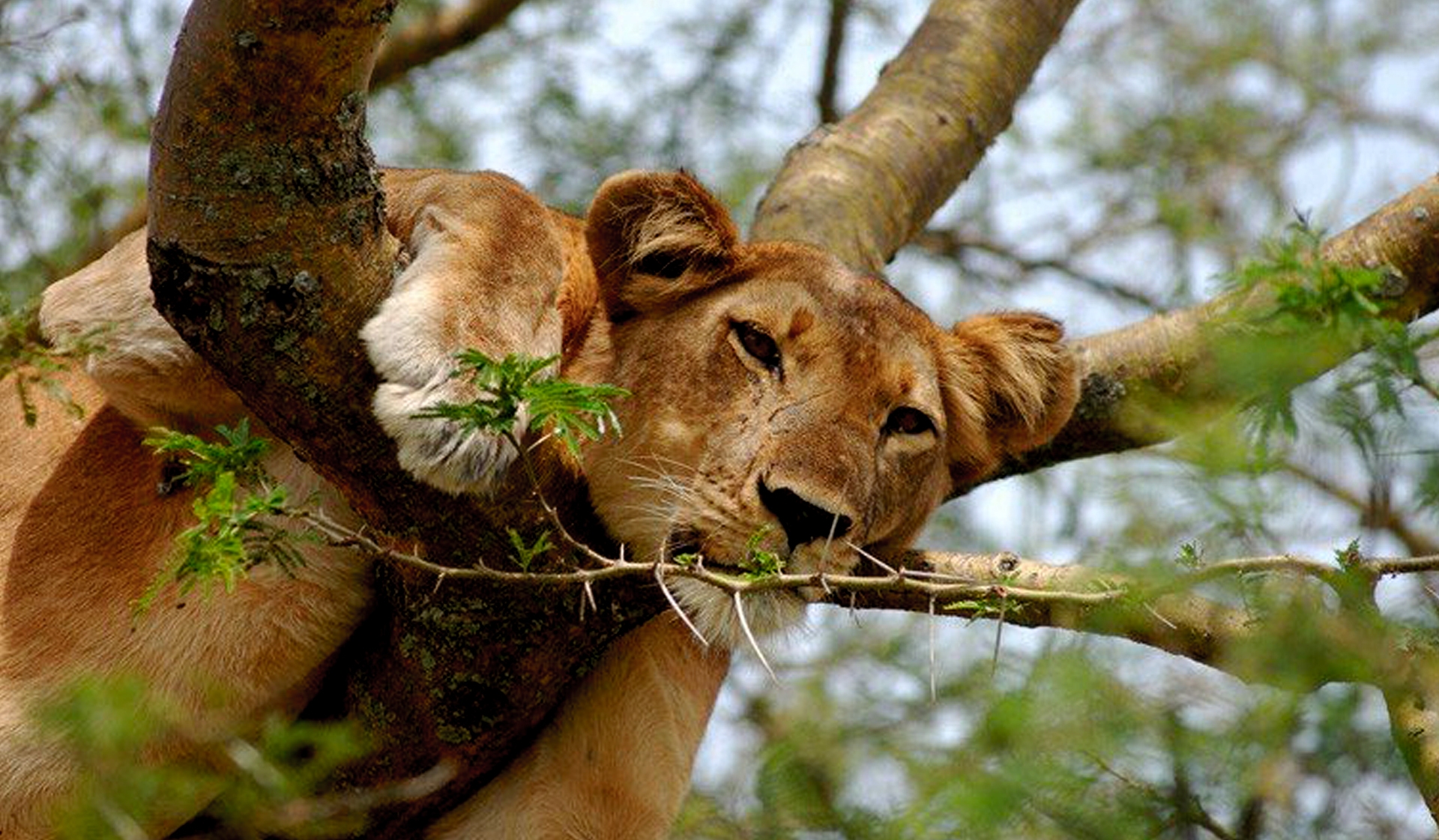 Queen Elizabeth spans the equator line; monuments on either side of the road mark the exact spot where it crosses latitude 00.

The park was founded in 1952 as Kazinga National Park, and renamed two years later to commemorate a visit by Queen Elizabeth II.

The park is home to over 95 mammal species and over 600 bird species.

The Katwe explosion craters mark the park’s highest point at 1,350m above sea level, while the lowest point is at 910m, at Lake Edward.

Set against the backdrop of the jagged Rwenzori Mountains, the park’s magnificent vistas include dozens of enormous craters carved dramatically into rolling green hills, panoramic views of the Kazinga Channel with its banks lined with hippos, buffalo and elephants, and the endless Ishasha plains, whose fig trees hide lions ready to pounce on herds of unsuspecting Uganda kob.

As well as its outstanding wildlife attractions, Queen Elizabeth National Park has a fascinating cultural history. There are many opportunities for visitors to meet the local communities and enjoy storytelling, dance, music and more. The gazetting of the QENP is in the Western Region of Uganda, spanning the districts of Kasese, Kamwenge, Rubirizi, and Rukungiri. The park is approximately 400 kilometres (250 mi) by road south-west of Kampala, Uganda’s capital and largest city.  The town of Kasese is just outside the northeastern edge of the park, while the town of Rubirizi is just outside the park’s southeastern boundaries. The park includes the Maramagambo Forest and borders the Kigezi Game Reserve, the Kyambura Game Reserve, and the Kibale National Park in Uganda, and the Virunga National Park in the Democratic Republic of the Congo.

Queen Elizabeth National Park occupies an estimated 1,978 square kilometres (764 sq mi). The park extends from Lake George in the north-east to Lake Edward in the south-west and includes the Kazinga Channel connecting the two lakes.

The park was founded in 1952 as Kazinga National Park. It was renamed two years later to commemorate a visit by Queen Elizabeth II.

Queen Elizabeth National Park is known for its wildlife, including Cape buffaloes, hippopotami, crocodiles, elephants, leopards, lions, and chimpanzees. It is home to 95 mammal species and over 500 species of birds. The area around Ishasha in Rukungiri District is famous for its tree-climbing lions, whose males sport black manes. Poachers killed six elephants in the park in 2015, triggering both anger and frustration within the Ugandan conservation community.